When the IUCN’s Grethel Aguilar was invited to be a visiting fellow at F&ES this semester she figured most of her time would be devoted to research. Instead she spent much of the spring working with students — and she couldn’t be happier about it.
By Kevin Dennehy 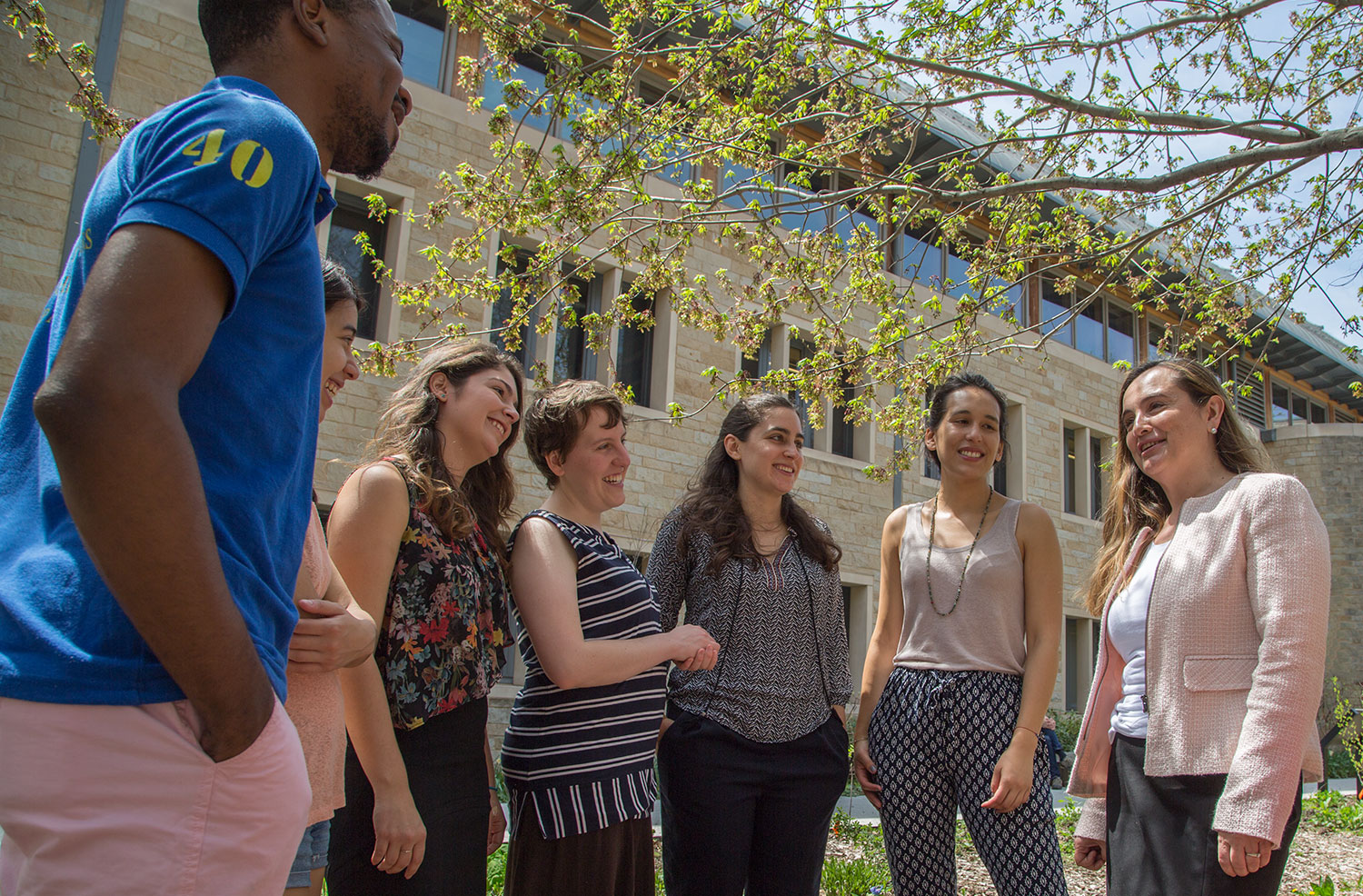 Photo by Matthew Garrett
Grethel Aguilar, far right, the 2018 Dorothy S. McCluskey Visiting Fellow in Conservation at F&ES, talks with several of the Yale students she helped support this semester.
For more than 25 years, Grethel Aguilar has helped communities across the world conserve the integrity of their cultures and natural environment.

As the regional director of the International Union for the Conservation of Nature (IUCN) Office for Mexico, Central America and the Caribbean, she has helped communities access clean water, advocated for stricter environmental regulations, assisted indigenous peoples in obtaining rights to their natural resources, and championed gender equality in environmental governance. 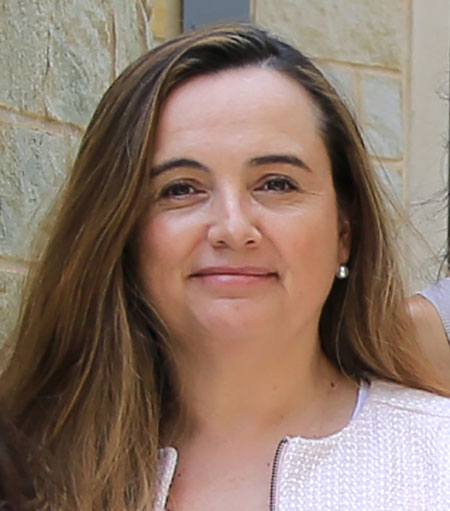 Photo by Matthew Garrett
Grethel Aguilar
But in recent years, she admits, she had started to ponder “What’s next?”

Then last year Aguilar, who is from Costa Rica, was invited to serve as the 2018 Dorothy S. McCluskey Visiting Fellow in Conservation at F&ES, which allows conservation practitioners — particularly women from developing countries — to spend a semester at the School. In that role, they are free to pursue independent research, to enhance collaborations between F&ES and environmental organizations, and to expand professional training opportunities for students. (McCluskey ’73 M.F.S. endowed the fellowship in 1997.)

When Aguilar arrived in New Haven for the spring semester she expected to complete research on a book, but it hasn’t quite worked out that way. Instead she found herself working with students on a variety of projects, helping them to organize major conferences and forge connections that will strengthen their own professional opportunities.

In an interview, Aguilar says the experience has left her feeling re-energized about her own work. And it has opened her eyes to the important role that young leaders can, and should, play in tackling the world’s environmental challenges.

What did you envision you would do during your time at F&ES?


Grethel Aguilar: For one thing I was very interested in knowing how this School works. What is that makes students want to come here? And from the perspective of an international organization like IUCN, how can we best support the new leaders coming out of universities like this?

Beyond that, when they asked me what I would want to do during this fellowship I said I would like to do some research as a follow up to a book I published in 2002. That book, which came out of my doctoral thesis, was related to how we can support indigenous peoples and local communities to protect their traditional knowledge associated with the use of genetic resources. So I came here to do that research, but the experience ended up being so much more than that. I discovered a whole range of other opportunities.

It’s difficult to even be aware of all the things that happen here. But I have been very privileged and honored to be part of some of the efforts that the School and the students have put together. I have given talks on my research and on issues related to environmental governance, ecotourism, and indigenous peoples. I participated in the TFD [The Forests Dialogue] conference on tropical forests. But the best experience for me has been supporting our students in putting together their own ideas, including the organization of the Sustainable Development in Latin America and the Caribbean [SDLAC] conference.

What was your role in the conference?


Aguilar: I didn’t even know the SDLAC conference existed before I got here. But when the students asked me to support them, of course I said yes. And it really became a big part of my stay here. I became a co-host, helped with developing the agenda, helped bring in speakers and connect people. But most of all, I gave support to students on how they could coordinate this conference in a way that would benefit them, too. 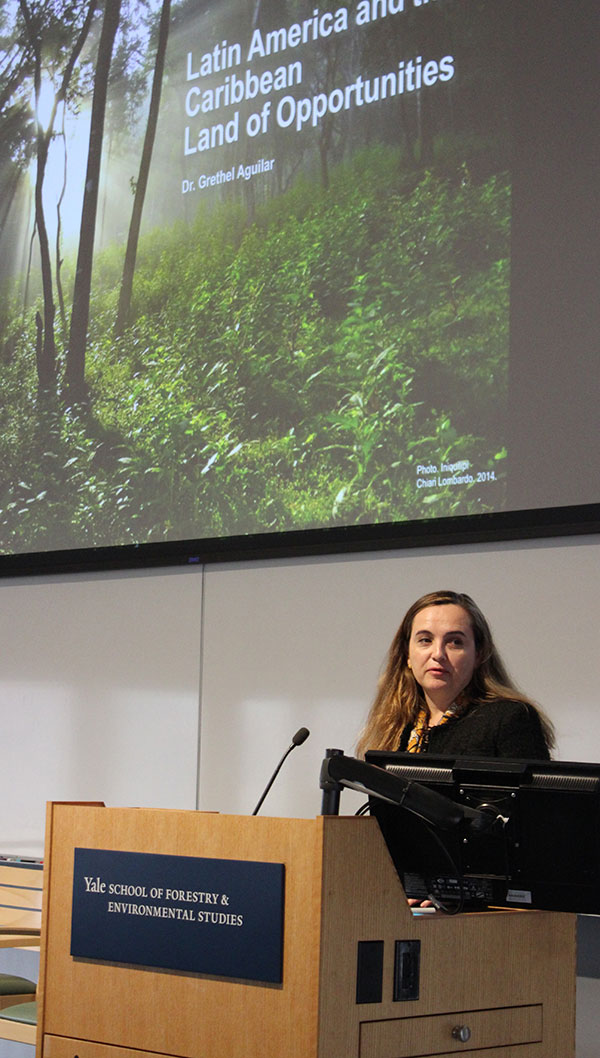 Photo by Maristher Guevara
Aguilar addresses the Sustainable Development in Latin America and the Caribbean (SDLAC) conference in April.
It really was a student-led conference, and I was honored to be a part of it. They’re the ones who coordinated the panels; in the end they didn’t ask professors to moderate the panels, they did it themselves. And they worked really hard to be well prepared. They led really high-level panels with very high-quality speakers. And we attracted high-level attendees, like former Mexico President Ernesto Zedillo. Even if you have never been to Latin America or the Caribbean, you could have grasped within one day the main issues that the region is confronting and how the region can contribute to the international environmental agenda.

I think I was happier than the students when it was so successful. It took my heart away when I arrived on the day of the conference and saw the students: they were all so well dressed, so handsome and beautiful. They arrived at 7:30 in the morning to make sure everything was perfect, from the food to the registration process, to receiving the speakers. And it was amazing.

I just hope they have the support to make next year’s conference even better. We’re talking about our future leaders. It is important for them to understand every corner of the world and to meet the best experts out there. I’m sure many of the students here are going to be in very high positions very soon. So it’s a good investment for the School.

Which gets to one of the questions you wanted to address here: how does the university fit into the greater environmental realm — and how well is it preparing new leaders? What have you learned about that?


Aguilar: I know that universities, especially this one, do a lot to connect students with things that are happening around the world. But I think somehow it is necessary to strengthen those links.

During spring break I returned to Costa Rica because the IUCN president, who is from China, was visiting the region. I decided to invite one F&ES student, who is Chinese, to be part of the IUCN delegation. We went from the field to the highest levels of government in Costa Rica. And I saw the value of having her as part of the delegation. She not only spoke Mandarin, which was helpful, but she knew about the subjects, could offer opinions, and added an important vision from a younger perspective.

Another student, as well as a former F&ES student, attended the World Water Forum in Brasilia, and they supported IUCN in ways that I can’t describe. And it was very positive for them: It wouldn’t have been the same if they had just registered for the event and sat alone in this big room. And so I asked myself again: Why aren’t we doing this more? These students are the future ministers of environment, the future heads of water departments.

What have you learned about this generation?


Aguilar: They are so aware, and they have so many ideas. They have a new way of doing things, and we need to take them seriously… They need to be brought in, but the door is not always completely opened. We should be the ones who open those doors and let them in and hear their ideas. I have felt very privileged to be exposed to a lot of knowledge during my time here at F&ES, and it’s not just hearing the talks by great experts. It’s also taking the time to hear the students.

During the SDLAC conference you talked about the opportunities related to sustainable development in Latin America. What can we learn from the efforts taking place there?


Aguilar: I think that our region, Latin America and the Caribbean, is so immensely rich in biological resources. People look at Latin America and say, ‘yeah, you have the rainforest…’ Well, yes, we have the rainforest. But we also have incredible water resources, we have great biological diversity, we have great cultural diversity. Sometimes people see us as being very poor because they are only thinking in terms of how much money people have and how poor people live. And yes, it’s true that we still have to achieve better levels in poverty and education. But, at the same time, people have to realize that we are also very rich in many ways.

And we have been implementing some of the most advanced tools in respect to protecting these resources. My country, Costa Rica, for example, is one of the best examples. We protected 25 percent of the territory, and now our biggest economic driver is tourism; tourists come to see our protected areas, our beaches, our biodiversity, and our culture. They don’t come to go to Disney Land or to do business. The majority comes to see the beauty of Costa Rica. And it’s because we made good decisions a long time ago and we are still trying to meet conservation targets in support of the people in the country.

How will your experience as a McCluskey Fellow affect how you do your job going forward?

In terms of conservation targets, I would say I have been more exposed to urban matters in terms of environment. In Latin America we normally focus on rural areas and, of course, rainforests. But the region is more urban now than ever before — more than 80 percent of the population lives in cities. Being here and hearing many of the talks on urban issues made me realize that we have to balance the agenda.

I have to say Dorothy McCluskey was a great visionary. When I was invited here I thought, ‘Why are they inviting someone like me to a university?’ I’ve been working hard for so many years putting together projects to conserve nature and to improve the quality of life for people. But I kind of felt, well, what’s next? Then I received this call from Yale University inviting me to come here and take some time from my normal life. I thought, maybe this is what I need!

I’ve certainly been busy here — working with students, giving talks, organizing conferences. But I’ve enjoyed not having any free time. I have been feeling very alive! I will miss being here, but I will leave with a lot of energy.

Did you ever get around to doing any research?


Aguilar: [Laughs] Yes, a little bit, especially since the SLDAC conference. I’m trying to finish at least a little bit of the research before I go. I’m determined to do it and I function well under pressure, so I know that I will do. But I’m not sure if it’ll happen while I’m here — The students are always in my office! People have said to me, ‘Grethel, you have to put up strict hours to receive students!’ But I’m not from the academic world. When I see the students and they say, ‘Dr. Aguilar can I talk to you?’, it is very hard to refuse. It’s probably because I know my time is limited and I want to help as much as I can.

This interview was edited for length. 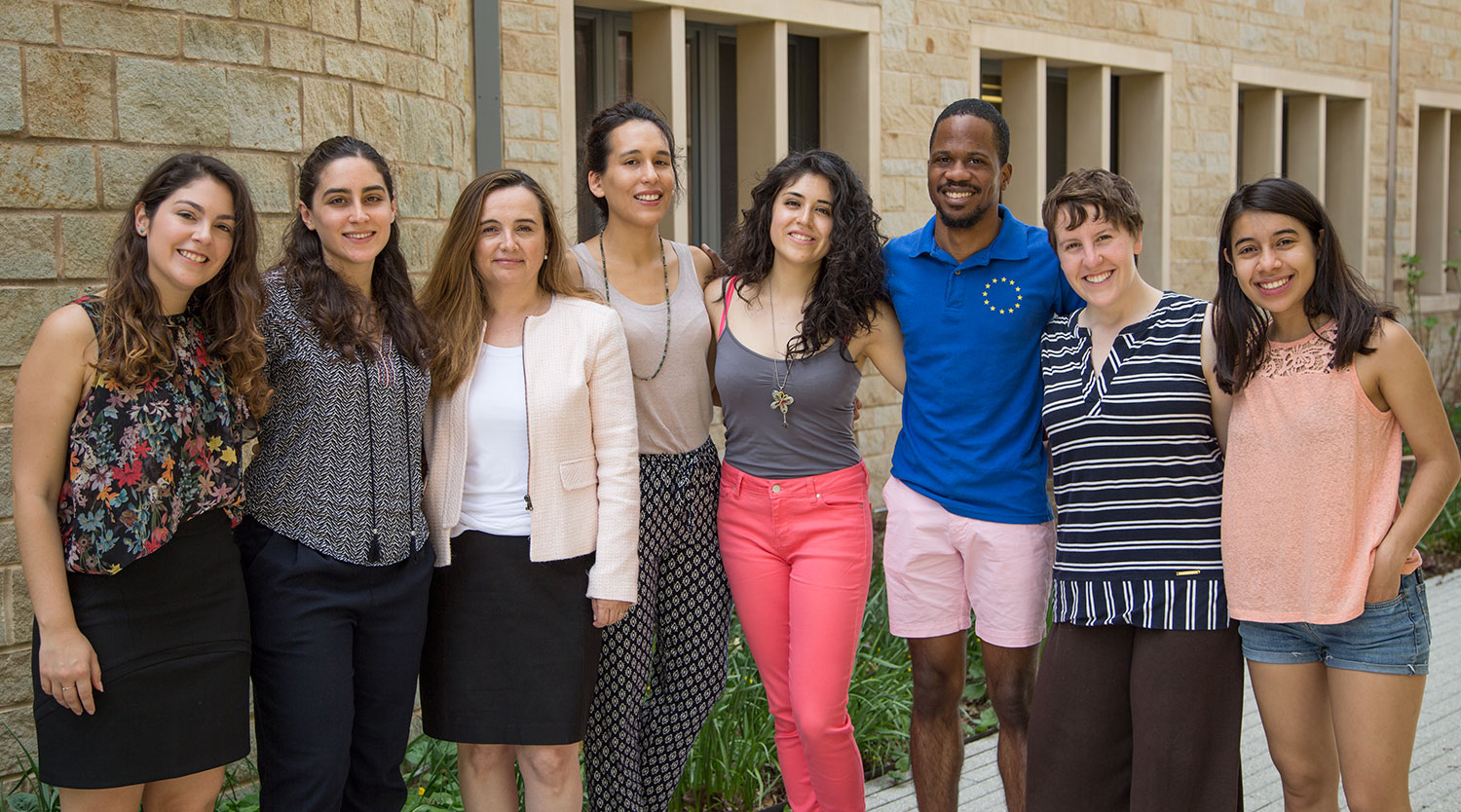