Will Marshland Keep up With Rising Seas? Study Finds Clues in the Sediment

A new Yale-led study describes a novel methodology that tracks the inland movement of marshland by analyzing for microscopic fossils in the sediment, a process that might provide important insights into the future of these vulnerable coastal ecosystems. 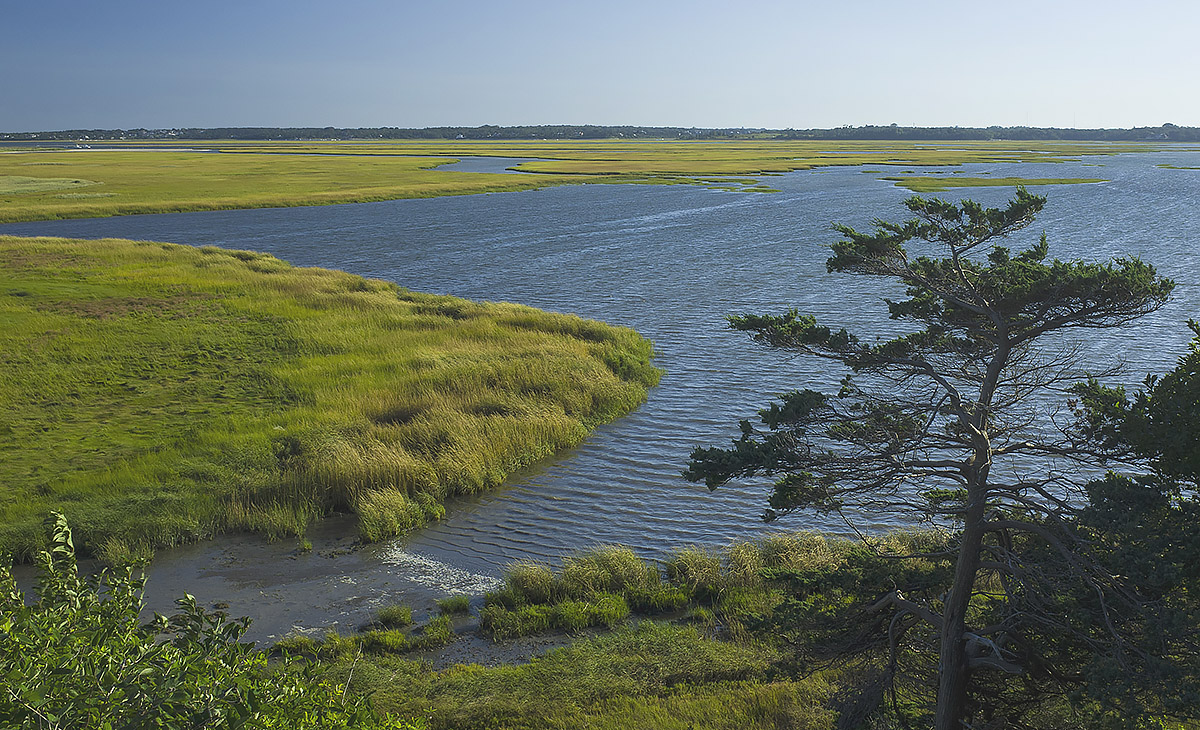 Photo by David Lada via Shutterstock
One of the consequences of sea level rise in many coastal locations will be the inland migration of salt marsh. That is, of course, if these marshes are able to move fast enough to keep up with encroaching waters.

To date, however, there is relatively little data to help predict where marsh will be likely to survive rising seas and the factors that will help determine its chances.

In a new study, Yale researchers describe a novel methodology that tracks the inland movement of marshland by analyzing for microscopic fossils in the layers of sediment, a process that enabled them to identify marsh migration that might not be evident through other methods.

Writing in the journal Estuaries and Coasts, the team, led by Shimon Anisfeld of the Yale School of Forestry & Environmental Studies (F&ES), reports on field experiments at two sites along the Connecticut shoreline. Using their new method, the researchers found that while salt marshes were moving upslope at both sites, they were moving at very different rates. Those different migration rates, they hypothesize, are likely driven by a range of factors— including the effects of large storm events.

Researchers hope their results, and this new methodology, will help improve modeling to predict a phenomenon that will affect coastal regions across the world, including along most parts of the U.S. Eastern Seaboard.
“The only way we’re really going to have a lot of marshes in the future is if they can move upland.”
— Shimon Anisfeld, Yale School of Forestry & Environmental Studies
“Marshes are suffering from sea level rise on the seaward side, and given how important they are as ecosystems, as habitat, and for storm protection, there are real concerns about how much marsh we’re going to have in a couple of decades,” said Anisfeld, a senior lecturer and research scientist in water resources and environmental chemistry.

“The only way we’re really going to have a lot of marshes in the future is if they can move upland.”

Other authors of the paper are Andrew Kemp, an assistant professor at Tufts University and former postdoctoral fellow at F&ES, and Jamie O’Connell, a former F&ES student who is now a watershed protection supervisor for the city of Cambridge, Mass.

Historically scientists have assessed migration of salt marsh by comparing changes that can be observed on maps, aerial photographs, or satellite images. In this case, the researchers examined the sediment at each of two marshes along the Connecticut shoreline — at Sherwood Island State Park and at Hammonasset Beach State Park — to reconstruct the migration of the marshes from 1963 to 2016.

Specifically, they tracked the presence of foraminifera, single-celled organisms that serve as an indicator of tidal inundation. By compiling occurrences of these organisms, they were able to demarcate a “wedge” of salt marsh peat sitting atop pre-existing layers of upland soil. 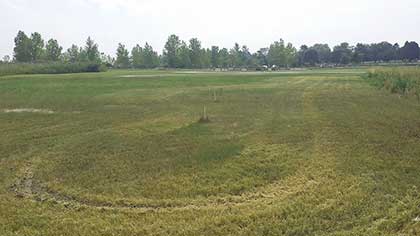 Courtesy of Shimon Anisfeld
An area along the Connecticut shoreline that has converted to marsh but is still being mowed.
They then used 137Cs dating — which measures traces of radioistopes injected into the atmosphere during nuclear testing in the 20th century to date wetland sedimentary deposits —  to figure out how quickly marshes have moved over non-marsh sediment.

The process enabled the team to measure marsh migration in areas where the process would not be observable through aerial photographs because the migrating marshes are being mowed by park staff and look like regular lawns from the air.

While the marsh-to-upland slope may be a key factor in these different migration rates, another potential factor is the effect of large storms, the researchers say. For instance, the storm surge that occurred during Superstorm Sandy, in 2012, was particularly large at the Sherwood site; it is possible, the authors speculate, that the majority of marsh migration measured over five decades occurred during Sandy and other similar events.

According to Anisfeld, the findings affirm that salt marsh located in areas where the slope toward the upland is steeper are far more vulnerable to the impacts of sea level rise.

“Here in New England, for instance, the glaciated landscape has created many ‘pocket marshes’ in valleys with deep slopes,” Anisfeld said. “In those places, the marsh doesn’t have a lot of places to go. Those marshes are up against a hard place. In contrast, in places like Sherwood and Hammo, where there is a little more room, we need to really do what we can to help facilitate migration.

“We hope that this methodology might be applied to many different places so that we can better understand and model the factors that control marsh migration.”

The research was supported with funding from Connecticut Sea Grant.
– Kevin Dennehy    kevin.dennehy@yale.edu    203 436-4842