Will Politicization of COVID-19 Crisis Erode National Consensus On Response?

A new survey on public perceptions of the COVID-19 crisis finds a national consensus that protecting public health should come ahead of opening the economy. But that dynamic could change quickly as the issue — like climate change — becomes increasingly politicized, Anthony Leiserowitz, director of the Yale Program on Climate Change Communications, says in an interview.
By Kevin Dennehy
Earlier this month, the Yale Program on Climate Change Communication (YPCCC) — which studies public climate change beliefs, risk perceptions, policy preferences, and behavior — retooled its efforts to investigate how Americans are responding to the COVID-19 crisis.

Anthony Leiserowitz
In a new report, “American Public Responses to COVID-19,” based on a survey of 3,933 Americans, they found that an overwhelming majority of people believe that protecting public health is a higher priority than re-opening the economy, want more action to limit the spread of the virus, and are hungry for more information.

However, this “national consensus” on the response to COVID-19 is subject to shifting social and political dynamics, says Anthony Leiserowitz, a senior research scientist at the Yale School of Forestry & Environmental Studies and the YPCCC director. In an interview, he discusses how Americans are responding to the pandemic threat, the kinds of communication that have helped them understand the risks, and how politicization of the issue already bears some resemblance to the public debate over climate change.

The Yale Program on Climate Change Communication typically focuses on public perceptions related to climate change and other environmental issues. Why did you decide to shift to the COVID-19 crisis?

Anthony Leiserowitz: We saw an opportunity to look at the COVID-19 crisis from an angle that's often not fully appreciated, which is the communication side of it. There obviously has been much attention and research looking at questions like, what is this disease? Where did it come from? Who is vulnerable? How do we protect ourselves? Can we develop a vaccine? And of course, that’s where much research attention should go. But when it comes to societal vulnerability and the actual impacts of the disease, communication arguably plays at least as big a role. Because in the end, communication is how we explain the threat and persuade hundreds of millions of people to adopt new behaviors to limit the epidemic and endure all the other consequences to our economy, society, and culture.

So we decided to look at how Americans are responding: What do they understand about this disease? What do they understand that’s correct, and what do they believe that is false? Who do they trust? Where do they get their information? What behaviors have they adopted and which ones have they not adopted? And of course, how do these responses play out differently across the political, social, and cultural fault lines of our society? Because as we know, this disease is spreading faster among some communities and hitting some groups much harder than others. Likewise, the flow of ideas, attitudes and behaviors can move in very different ways through different parts of society. As a result, different people may respond in different ways and we wanted to try to understand that as a way to help public health, political, and community leaders communicate more effectively.

How well do Americans understand this crisis? And how are they responding?

Leiserowitz: We found that fortunately the great majority of Americans understand many of the basics; for instance, 92 percent know that they should be washing their hands frequently. And 92 percent know that they should be avoiding large gatherings of people, and that the virus can be spread by people who are asymptomatic. It’s actually quite impressive to see that some of these basic facts, some of these basic messages, have gotten through at scale — a massive public education and behavior change achievement. 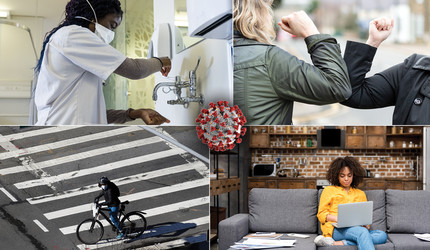 Read the report, “American Public Responses to COVID-19”
We also find that Americans overwhelmingly trust medical experts as a source of information — far more so than political leaders. That’s super important in a society where some people in recent years have attacked the very notion of trusting science, expertise, and facts. But it's not just that trusted experts were sharing this information — like Anthony Fauci [director of the National Institute of Allergy and Infectious Diseases] or Deborah Birx [from the U.S. Department of State], or public health officials across the country…. It’s the way they communicated these basic facts to the mass public. In our work [with our colleagues from George Mason University], we often emphasize a basic guideline for effective communication: simple clear messages, repeated often, repeated often, repeated often, by a variety of trusted sources.

Public health officials and the media have been communicating these key facts and behaviors over and over and over again. “Wash your hands for at least 20 seconds...” How many times have you heard that statement? How many times have you seen people demonstrating it with simple mnemonics, like, “Sing Happy Birthday twice while you’re doing it”? Or demonstration videos by comedians and even hamsters? These are simple but incredibly important ways to help a population of over 300 million people to suddenly, collectively, adopt a new set of behaviors. Again, simple, clear messages repeated often, by a variety of trusted sources.

This crisis is forcing all Americans to make sacrifices and accept enormous disruptions to their lives. What do your results say about their appetite to continue doing so?

Leiserowitz: Well, there are obviously tradeoffs between protecting public health and restarting the economy. Leaders across the country are being forced to make critical choices — and not just at the federal level, but in all state governments, city governments, and so on. So we wanted to understand: is there a sizable proportion of Americans who want to reopen the economy? And what we’ve found, to our surprise, is that by a margin of more than five to one, Americans said that stopping the spread of the coronavirus, even if it harms the economy (84 percent) is more important than stopping the decline in the economy, even if more people get infected (16 percent).

We then broke it down by demographic and political affiliation and the findings were even more revealing. Very large majorities prioritized stopping the epidemic, across all demographics — gender, race, ethnicity, income, education levels, urban to rural. Even large majorities of people who reported losing their job because of the coronavirus or who are looking for work. Even across political lines: more than 75 percent of Republicans — and more than 75 percent of 2016 Trump voters. We found that there is actually a strong national consensus that public health should come first — or at least there has been. Of course, in the past few days we’ve seen the emergence of this new “Liberate” movement … Unfortunately, the epidemic is becoming increasingly politicized. So, as with everything else with this virus, this is fast evolving story.

Do you see similarities between this issue and how the politics of climate change have evolved over the past two decades as that issue, too, increasingly became used as a political instrument?

Leiserowitz: There are some fundamental differences between COVID-19 and climate change, but there are also a lot of parallels, too. In December and January, it was already very clear what was going to happen, at least among people who pay attention to data and evidence and who understand how models work. Even if experts didn’t know the all the particulars of this virus, epidemics are well understood and it was clear that this one was spreading rapidly around the world and was absolutely going to impact the United States.

But for most people at the time, nobody that they knew had gotten Covid-19, because very few people in the United States had been diagnosed with it. So many people thought, “Well, this is something that’s happening over in China, not something that we need to worry about here.” The problem, of course, is that by the time you have finally do experience the impacts, it’s too late to head them off. That’s actually very similar to climate change where, again, scientists have very clearly warned us — literally for decades now — global warming is real, it’s human caused, it’s already harming people, and the consequences are going to get much, much worse if we don’t act now. And yet, because most people don’t see it in their own lives, they often disregard it, discount it, or even dismiss the existence of the problem.
“Neither climate change nor the coronavirus cares whether you’re a Republican or a Democrat, whether you’re a conservative or a liberal. But our politics... unfortunately does affect how we choose to respond.”
— Anthony Leiserowitz
In these new “Liberate America” protests, we’re seeing some of the same actors that have been denying that climate change is a serious problem. As we’ve seen on the climate front, much of this resistance is driven by the political ideology of radical individualism. These people are deeply suspicious of climate change because it's the ultimate collective action problem. We can’t solve climate change by our own virtuous individual behavior alone — it’s way too big and too structural — we need to change our energy, transportation, building, and land use systems, among others. And that’s the same worldview that’s driving these protesters, who are basically saying, “You’re infringing on my individual freedom by telling me to shelter at home.”

In the end, neither climate change nor the coronavirus cares whether you’re a Republican or a Democrat, whether you’re a conservative or a liberal. But our politics, at least in the United States, unfortunately does affect how we choose to respond.
In the coming days the Yale Program on Climate Change Communication will release additional reports based on these surveys, including analyses of the impacts of the epidemic on public mental health, public acceptance of a CDC recommendation that individuals wear masks, and public responses by state. You can sign up to receive their research reports here.