From Research to Carbon Charge, Nobel Prize Winner Has Deep Influence at F&ES

This week William Nordhaus, Sterling Professor of Economics at Yale, won the Nobel Prize. At the Yale School of Forestry & Environmental Studies, where he holds a secondary appointment, his research and teaching have influenced and inspired generations of scholars.
By Kevin Dennehy
In the mid-1970s very few scientists were thinking seriously about climate change. And even fewer were worried about how it might affect the global economy in the coming decades.

But for William Nordhaus, a Yale Sterling Professor in Economics and professor at the Yale School of Forestry & Environmental Studies (F&ES) — who this week won the 2018 Nobel Prize in Economic Sciences — the long-term fate of the planet was very much on his mind. 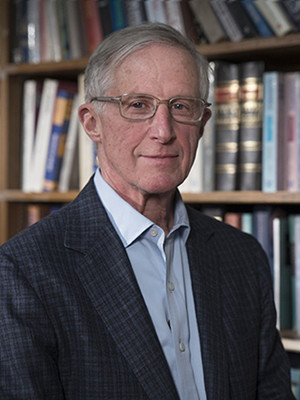 Courtesy of BBVA Foundation
William Nordhaus
Robert Mendelsohn remembers well. At the time, he was a young Ph.D. student in economics at Yale, and Nordhaus was his advisor. Mendelsohn, a longtime professor of economics at F&ES, remembers his mentor advising him to study the intersection of economics and the environment. But as for tackling an issue so uncertain as climate change? At the time, Mendelsohn admits, it seemed a little risky.

Before long, however, it became clear that William Nordhaus’ research was ahead of its time. Over the next four decades, Mendelsohn says, it would change our understanding of what is now understood as a global threat — and how society might avoid the worst outcomes.

“Bill Nordhaus is the father of climate change economics,” said Mendelsohn, the Edwin Weyerhaeuser Davis Professor of Forest Policy and Professor of Economics at F&ES, who would go on to collaborate with Nordhaus on important climate research, including about the potential impacts on agriculture.

“He organized this research for the first time, and pretty much everything else that has come after is a daughter product of that work.”

Nordhaus, who shared the 2018 Sveriges Riksbank Prize in Economic Sciences with Paul Romer, a professor of economics at New York University, was honored for “integrating climate change into long-run macroeconomic analysis.”

At the Yale School of Forestry & Environmental Studies, where he holds a secondary appointment, his research and teaching have influenced and inspired generations of scholars.
“He’s been able to bring the science into an economic model in order to anticipate what the damages caused by climate change might look like — and to build a theoretical framework that helps us make better decisions into the future.”
— Robert Mendelsohn
For three decades, he has worked with Mendelsohn on important climate-related research. Their 1994 study on the potential climate impacts on agriculture offered early evidence that the changes would vary from region to region, with warmer regions paying the biggest price. Six years ago, they published an influential study on how different sectors and industries affect the global climate.

“He has just pushed the envelope on so many fronts,” Mendelsohn says. “He’s been able to bring the science into an economic model in order to anticipate what the damages caused by climate change might look like — and to build a theoretical framework that helps us make better decisions into the future.”

Earlier this year, Nordhaus co-authored a paper with Kenneth Gillingham, a professor of economics at F&ES, which concluded that potential for high global economic growth — and, as a consequence, an even steeper rise in carbon emissions — could be much greater than previously known. In their collaboration, they’ve tried to find a way to integrate that uncertainty into a greater framework to quantifies uncertainty in future outcomes, Gillingham says.

William Nordhaus is author of two books published by Yale University Press: “A Question of Balance: Weighing the Options on Global Warming Policies,” (2008), and “The Climate Casino: Risk, Uncertainty, and Economics for a Warming World” (2013).

“The hallmark of Bill’s work is the transparency and the intuition that goes into it,” he said. “He is just amazing at seeing the essence of a problem and clarifying that in a transparent way to the reader.”

As a longtime champion for carbon pricing as a solution to climate change, Nordhaus helped inspire what has become the Yale Carbon Charge Project.

In fact, it was during a 2014 Earth Day panel event, organized by F&ES Prof. Daniel Esty, that the initiative was born. During the event, an F&ES student asked the panel about Yale’s role in reducing carbon emissions. In an offhand comment, Nordhaus, one of the panelists, suggested, “Yale could implement an internal carbon tax.”

The idea gained traction. Within a year Yale President Peter Salovey appointed a task force, chaired by Nordhaus, to examine whether a carbon tax might help the university achieve its sustainability goals. Then, after a six-month pilot program, the university introduced an internal carbon-pricing initiative that now incentivizes lower energy consumption in 250 buildings across Yale.
“He is just amazing at seeing the essence of a problem and clarifying that in a transparent way to the reader.”
— Kenneth Gillingham
In addition to changing energy choices on campus, the Yale Carbon Charge Project has spawned numerous research projects, making the university “a living lab.” The project also inspired an F&ES case study, through the School’s Case Study Integration Initiative, that is available for use in undergraduate and graduate level courses covering topics of environmental economics and policy, corporate social responsibility, and climate change mitigation.

And for all his acclaim as a researcher, Nordhaus still loves working with students, Mendelsohn said. Last year they co-taught a seminar course in which F&ES and economics students were charged with reproducing prominent climate-related studies. In doing so, they were able to evaluate the strength of the outcomes, identify assumptions that influenced conclusions, and reevaluate whether different conclusions might have been reached.

”For me it’s been an enormous privilege to be able to work with him,” Mendelsohn said. “And I learn a lot every time I interact with him. And that’s still true to this very day.”