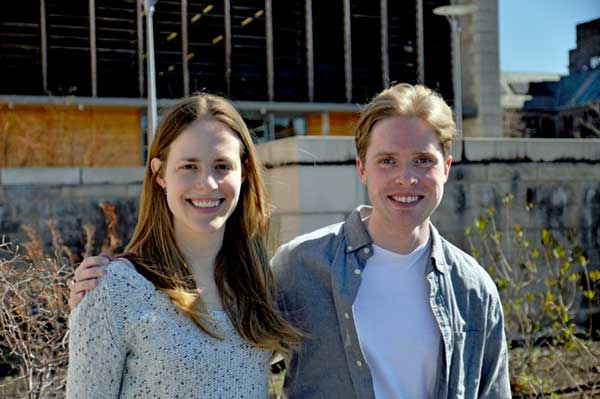 The Wyss Scholars Program supports graduate-level education for the next generation of leaders in western land conservation. The recipients will receive tuition, internship, and post-graduate support as part of the program.

Panek and Rempel were recognized for their extraordinary leadership potential, and strong interest and devotion to land conservation in the western U.S.

Panek, a Colorado native, spent five years in southern Chile as a cartographer, conservation planner, marketing consultant and coordinator before coming to Yale. She has also conducted research on watershed issues in the Chesapeake Bay and Mississippi River watersheds, examined wastewater management in Costa Rica, and researched the impacts of land use on soil quality in Oregon.

Rempel has performed restoration work for the cities of Boulder, Colo. and Gresham, Ore. and served as an economist for ECONorthwest. In that role, he worked on projects related to natural resources, working on Pew’s Western Values Project and estimating the potential economics of removing California’s Hetch Hetchy Dam.

“Our School has a long history of sending graduates into the U.S. West, where they have worked as leaders and practitioners committed to the responsible conservation of public and private lands,” said F&ES Dean Indy Burke, who before coming to Yale was Dean of the Haub School of Environment and Natural Resources at the University of Wyoming. “We appreciate the generosity of the Wyss Foundation, whose continued support helps us to give these future leaders the training they need.”

Wyss Scholars are engaged in a variety of issues including land conservation and stewardship, environmental policy, field ecology, fire science and management, and forestry. They are working for nonprofit organizations like The Nature Conservancy, and for governmental organizations like the U.S. Department of Agriculture, U.S. Forest Service, and National Park Service.