The Wyss Scholars Program supports graduate-level education for the next generation of leaders in western land conservation. The recipients will receive tuition, internships, and post-graduate support as part of the program.

This year’s scholars were recognized for their leadership potential and devotion to land conservation in the western United States. 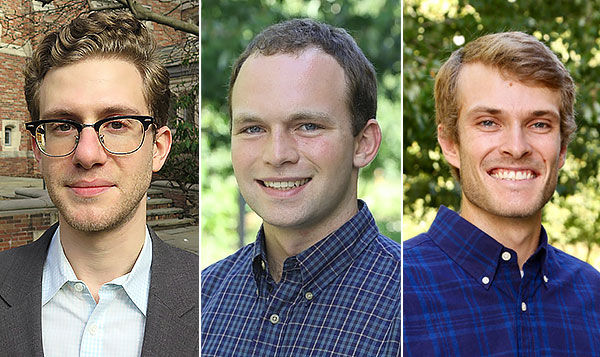 Matthew Lifson, left, Jack Singer, and Ben Williamson
“Since its founding our School has sent young leaders to the American West who are committed to responsible conservation and to finding innovative solutions to the region’s evolving resource challenges,” said F&ES Dean Indy Burke. “We are deeply grateful to the Wyss Foundation, which for more than a decade has helped assure that these emerging leaders have the training they need.”

One of this year’s recipients, Matthew Lifson, who is pursing a joint degree at F&ES and Yale Law School, became involved in western issues after working on project about a dam removal in Washington State during his second semester at law school. The project helped Lifson, a New Jersey native, see the many ways that dams degrade Western lands: starving wetlands of silt, ending the seasonal inundation of floodplains, and depriving soils of marine nutrients released by salmon carcasses. This inspired him to accept an internship with an Oregon-based organization that aims to halt government actions that contribute to climate change.

This summer he will work with the Natural Resources Defense Council in San Francisco, where he hopes to join their work on Western lands, such as their challenge to the shrinking of national monuments.

“For historical, political, and climatological reasons, much of the West is still wild in a way that the East Coast has not been for at least a century,” he says. “This relative lack of development explains why there are so many Western species and resources left to save — and why the stakes of Western conservation are so high.”

Jack Singer, a first-year student at F&ES, says the cultural and ecological diversity of the Rocky Mountain West inspires him. But while climate change and population growth pose threats to the landscapes and livelihoods of this region, he sees these challenges “as opportunities to recognize complexity and adapt to natural resource issues on multi-use, working lands.”
“Since its founding our School has sent young leaders to the American West who are committed to responsible conservation and to finding innovative solutions to the region’s evolving resource challenges.”
— Indy Burke, F&ES dean
Collaboration with community stakeholders is required to tackle these threats, Singer says. And he’s done just that. As state ecological coordinator with the Bureau of Land Management in Wyoming, he united stakeholders and facilitated collaboration between nonprofit organizations and the federal government. In the coming years he aims to bring together an even wider group of stakeholders — including government officials, private landowners, forestry professionals, and advocates — to promote collaboration on forest and land use policy.

“My experience in Western communities will inform my career crafting consensus-driven land management policy to increase landscape and community resiliency,” he said. “As a forester or land manager, I could manage thousands of acres, but as an orchestrator of collaborative policy, I will influence society, land managers, and landscape-scale decisions over millions of acres.”

Ben Williamson, also a first-year student at F&ES, grew up in Colorado, where he says his parents were “lured by a sense of individualism and communion with wild spaces” — an ethos, he says, that shaped his own life. But as he watched rural communities transform into suburban sprawl during his youth —with fracking rigs and golf courses replacing pasture and open space — he came to see that these very values were under threat.

After moving to Montana for college, he discovered communities living “within” the land, and became committed to “fostering rural culture alongside ecosystems in pursuit of landscape connectivity.” As a student at the University of Montana, he did field work in the Greater Yellowstone Ecosystem and worked for the Natural Resources Defense Council on livestock-predator conflict mitigation policy. More recently he directed an outdoor education center in the Flathead River valley.

“I made my journey from Colorado to Montana seeking the preservation of a set of values that I felt were under threat,” he said. “But I see now that a firm sense and commitment to place is what’s needed to embody these values. In the critical juncture of which we live, there is no place left to run.”

Since 2006, The Wyss Foundation has provided scholarship funding and post-graduate fellowships to 31 master’s students.

Previous Wyss Scholars from F&ES include Mikailah McKee ’13 M.F., who is now the stewardship director at the Western Rivers Conservancy; Hanna Mershman ’14 M.F., the timber sale administrator for the U.S. Forest Service in Williamette National Forest; and Ben Hayes ’15 M.F., the working lands project director at the Pinchot Institute for Conservation.