Last year Yale embarked on an experimental program examining the potential for carbon pricing on the Yale campus. A recent analysis, conducted by F&ES students, shows that the pilot program contributed to carbon reductions.
By Luke Elder and Brenda Meany 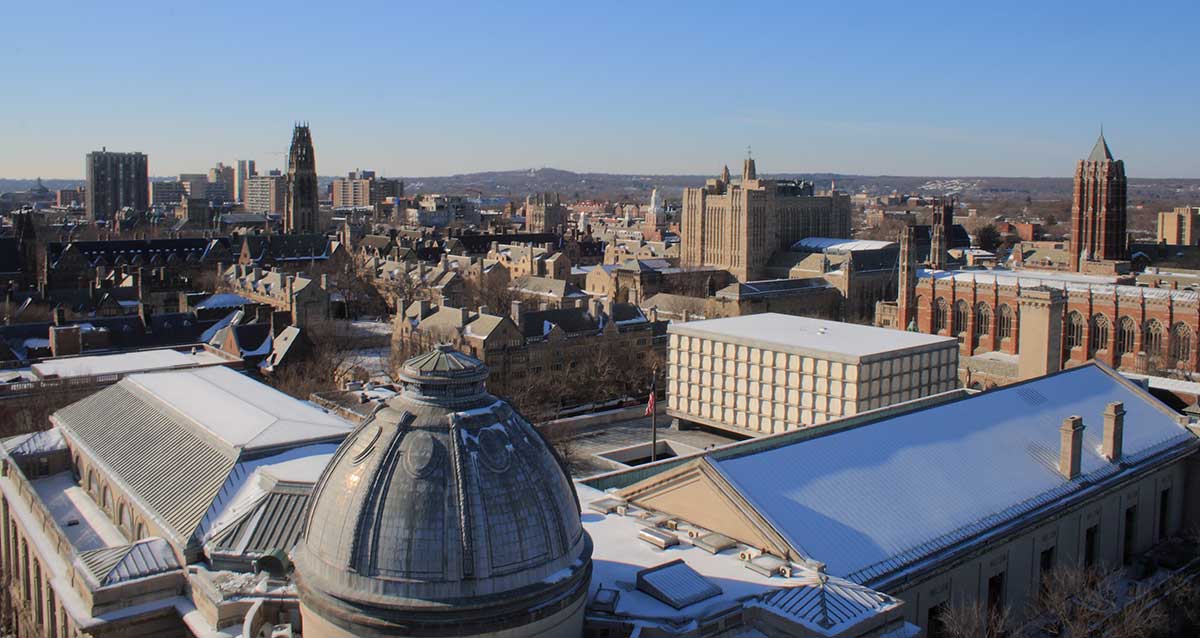 Climate change is one of the greatest challenges of our time, as its threats are imminent and its impacts are significant. The most recent report from the Intergovernmental Panel on Climate Change (IPCC) brings to light the dangerous effects that climate change is already having on water resources, built environments, agriculture, human health, and natural ecosystems. If countries, states, regions, companies and institutions do not act to keep warming below two degrees Celsius, these dangers will only be exacerbated.

Fortunately, there has been increased momentum in recent years to create such a solution to climate change in the public and private sectors in the form of carbon pricing. From December 2015 to May 2016, Yale University conducted a carbon charge pilot on 20 buildings to test the efficacy and feasibility of carbon pricing on Yale’s campus.

Last fall, we analyzed the results of this pilot and found that the policy effectively contributed to a reduction in emissions on campus. This finding is a success for the Carbon Charge, and hopefully will motivate more student research and study around policy refinement and implementation.

Inside the Yale Carbon Charge

Information: The five units received a building energy report along with information about the $40 per metric ton of carbon dioxide equivalent  (mtCO2e) price without financial consequences.

Redistribution: The units were subject to a revenue-neutral scheme in which each unit was compared to the group’s overall percent change in emissions from the group’s baseline. These units incurred a charge or a rebate based on emissions relative to the baseline value.

Investment: They received a subsidy equal to 20 percent of their baseline carbon charge for investment on energy efficiency. This scheme was an attempt at simulating the second year of the program during which those units that performed well would spend a portion of their carbon charge revenue on building efficiency, education and outreach, and energy conservation initiatives.
Twenty buildings were chosen for the pilot from approximately 270 Yale buildings based on their carbon footprint, building and budget types, and data quality. These 20 buildings were stratified into four treatment types of five buildings each and the remaining 250 buildings were placed into a control group. The control group did not participate in any pricing scheme and did not receive additional information or engagement. The four treatments groups were information, target, redistribution, and investment.

Throughout the six-month pilot, each of the 20 pilot units received a monthly utility report which included metered energy use and cost information. Yale applied a $40 per metric ton of carbon dioxide equivalent (mtCO2e) carbon price based on the federal government’s estimate of the Social Cost of Carbon (SCC). The pilot included all direct greenhouse gas (GHG) emissions (Scope 1) and indirect GHG emissions from the generation of purchased energy (Scope 2). While the buildings’ representatives received a bill for carbon on their monthly energy report, they did not incur the charges until the end of the pilot. The buildings were not allowed to purchase carbon offsets to reduce emissions at a carbon price lower than the $40 cost set by the Carbon Charge Task Force.

We analyzed the results of this pilot in order to answer three primary questions related to the current effectiveness of the Carbon Charge Project pilot.

All treatment groups that participated in the Carbon Charge experienced a statistically significant reduction in emissions relative to their baseline. These results are positive for the Carbon Charge Program at Yale, justifying their efforts at instituting a price on carbon in order to decrease campus emissions.

However, emissions for all Yale buildings, not just those that participated in the pilot, decreased relative to their baseline. This could be due to the fact that the winter during the 2015-2016 academic year was warmer on average than the previous five winters, and all units used less energy for heating.

Our results conclude that investment in spending on self-guided energy actions led to the greatest emission reductions. Given that the Investment scheme was found to be associated with the greatest reduction in emissions relative to the other treatment groups and the control, we sought out the administrators for the five business units in that treatment to investigate what actions that took to reduce their emissions. We found particularly interesting results from La Casa Cultural and Stoeckel Hall.

La Casa Cultural (301 Crown Street) used funds from the Carbon Charge Investment scheme for signage around the building to communicate energy efficiency practices, such as turning out the lights, closing  windows, and utilizing recycling bins.

Stoeckel Hall converted manual light switches to motion activated ones in restrooms and public areas, as well as reducing heating requirements by adjusting set points as to not heat areas unnecessarily late in the evening.

For F&ES, Kroon Hall was included in the redistribution scheme during the pilot program. During the pilot, F&ES worked on technical solutions to reducing the building’s energy use (such as adjusting the occupied hours of the building and installing a thermal curtain in one office space). In addition, a communication strategic plan was created that included using social media, email, articles, and video interviews to discuss the Carbon Charge and improve its educational value to the community. Due to these efforts, Kroon Hall reduced emissions by 17 percent relative to our baseline for a total rebate of $630.90. This rebate went towards the F&ES Environmental Stewardship Committee to further energy reduction efforts on campus.

In the end, the university’s pilot found local illustrations of many issues observed in global efforts to price carbon, namely, that carbon pricing design and implementation is complex, administratively challenging, and politically sensitive. While there is still much to study and learn, the Carbon Charge pilot now provides a framework for others to develop carbon pricing models within educational institutions and more broadly across other sectors, all of which collectively aim to achieve a low-carbon economy.

Overall, it appears that the Yale Carbon Charge is effective at reducing emissions, and is therefore a critical component of Yale’s strategy to meet its goals outlined in the Yale Sustainability Plan 2025.
Luke Elder ’18 M.E.M. and Brenda Meany ’18 M.E.M. are first-year students at the Yale School of Forestry & Environmental Studies.