More than Just Talk: F&ES Initiative
Aims to Take ‘Dialogue’ to Next Level

By Kevin Dennehy
Throughout the academic year the Yale School of Forestry & Environmental Studies invites to campus an array of guests to discuss and debate the most pressing, and often contentious, environmental issues facing the planet.

A new initiative aims to take these dialogues to the next level.

Building on the School’s international standing as a respected source of environmental knowledge and leadership, the School this semester introduced the Yale Environmental Dialogue (YED), a series that will convene leading thinkers and decision-makers on issues related to sustainability. Critically, the events — which will include professionals, public officials, civil society leaders, and other stakeholders — will generate outcomes that can inform future solutions.
“Convening leading experts to address difficult or contentious challenges is one of the ways we provide leadership and achieve real impact — but we can do more.”
— Indy Burke, F&ES Dean
The initiative was conceived during the School’s recent strategic planning process.

“Convening leading experts to address difficult or contentious challenges is one of the ways we provide leadership and achieve real impact — but we can do more,” said F&ES Dean Indy Burke, who initiated the strategic planning process when she arrived at Yale last year. “Through this initiative we will direct these discussions in a way that is productive, process-oriented, and impactful.”

“We are working with our students to develop skills in understanding diverse viewpoints and working with others in collaborative processes,” she added. “The Dialogue is intended to model the best of those.”

For the inaugural event, held on Sept. 17, the School invited to campus former French Foreign Minister Laurent Fabius, who was chair of the 2015 United Nations Climate Change Conference, or COP21, the international forum that produced the landmark Paris Agreement. 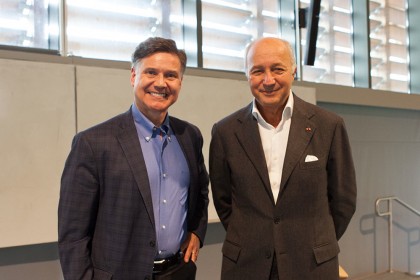 Photo by Matthew Garrett
Daniel Esty, left, with former French Foreign Minister Laurent Fabius, chair of the 2015 United Nations Climate Change Conference, during the inaugural Yale Environmental Dialogue event.
The two-hour event began with a conversation between Fabius and Daniel Esty, the Hillhouse Professor of Environmental Law and Policy at F&ES and Yale Law School, on how the global community can sustain the momentum achieved in Paris. But in keeping with the goals of the initiative, after several minutes the conversation opened up to include an active back-and-forth discussion among the panelists and attendees.

Future events could take many forms, from similar discussions with leading experts to two-day sessions among a variety of stakeholders, Esty said.

“The form of these dialogues will likely vary over time and the exact goals are still being worked out in an ongoing conversation among faculty, students, and staff,” said Esty, who chairs the steering committee developing the scope of the initiative. “But the core theory is that the university has a particularly important place as a convener of discussions and conversations on important topics related to the sustainability of our planet.”

At F&ES, there are models for convening parties to address difficult or contentious issues, including the Yale Forest Forum, which began as a small dialogue group focused on developing national attention on U.S. forest policy and management, and The Forest Dialogues, an outgrowth of the Forest Forum that engages multiple stakeholders to find solutions to thorny forestry challenges worldwide.

Over more than a decade, The Forests Dialogue has brought together more than 2,500 leaders — including from corporations, government, NGOs, and local communities — to build trust and devise tangible solutions to contentious issues during a series of “initiatives” held across the planet.  One of the reasons for TFD’s success is that it is “results driven,” said Gary Dunning ’96 M.F., the TFD executive director who also sits on the committee developing the new YED forum.

He sees the Yale Environmental Dialogue as an opportunity to achieve similar results on a range of national and global issues.

“The School should act more directly as a convener in a way that leads to outcomes,” he said. “It’s important that these are not just talk shops, but that they’re actually productive and progressing an issue. And how do you progress an issue? You create the structure and process to produce results, prioritize key challenges and develop coalitions and next steps. And that is what the YED is all about.”