In Uncertain Times, Grads Urged to
Own Their Expertise, Embrace Struggle

Under a tent on the Kroon Hall courtyard Monday, speaking to his classmates on Commencement Day, Ben Soltoff ’19 M.E.M./M.B.A. remembered another day, a couple of years ago, on the same lawn. On that day, newly admitted students were invited to play tug-of-war; in a series of contests, teams would pull in opposite directions, usually gaining little ground until, eventually, one or both sides collapsed in the mud.

He’s seen this dynamic play out in less literal ways when students have engaged in difficult conversations. Sometimes, he said, the tension drives progress. Other times it just results in neither side getting anywhere.

As the Class of 2019 now prepares to scatter to all corners of the planet, trained in a range of fields and disciplines to tackle common environmental threats, Soltoff reminded his classmates that they’re more likely to find success if they pull in the same direction. Through collaboration, empathy and understanding, he said, they can achieve successes that simply aren’t possible separately.

“To this day it brings me tremendous joy and hope to see so many sides of the environmental movement come together here at F&ES… We really are all in this together,” said Soltoff, one of three class speakers during the ceremony. “These people are your network, your teammates, your ecosystem.” 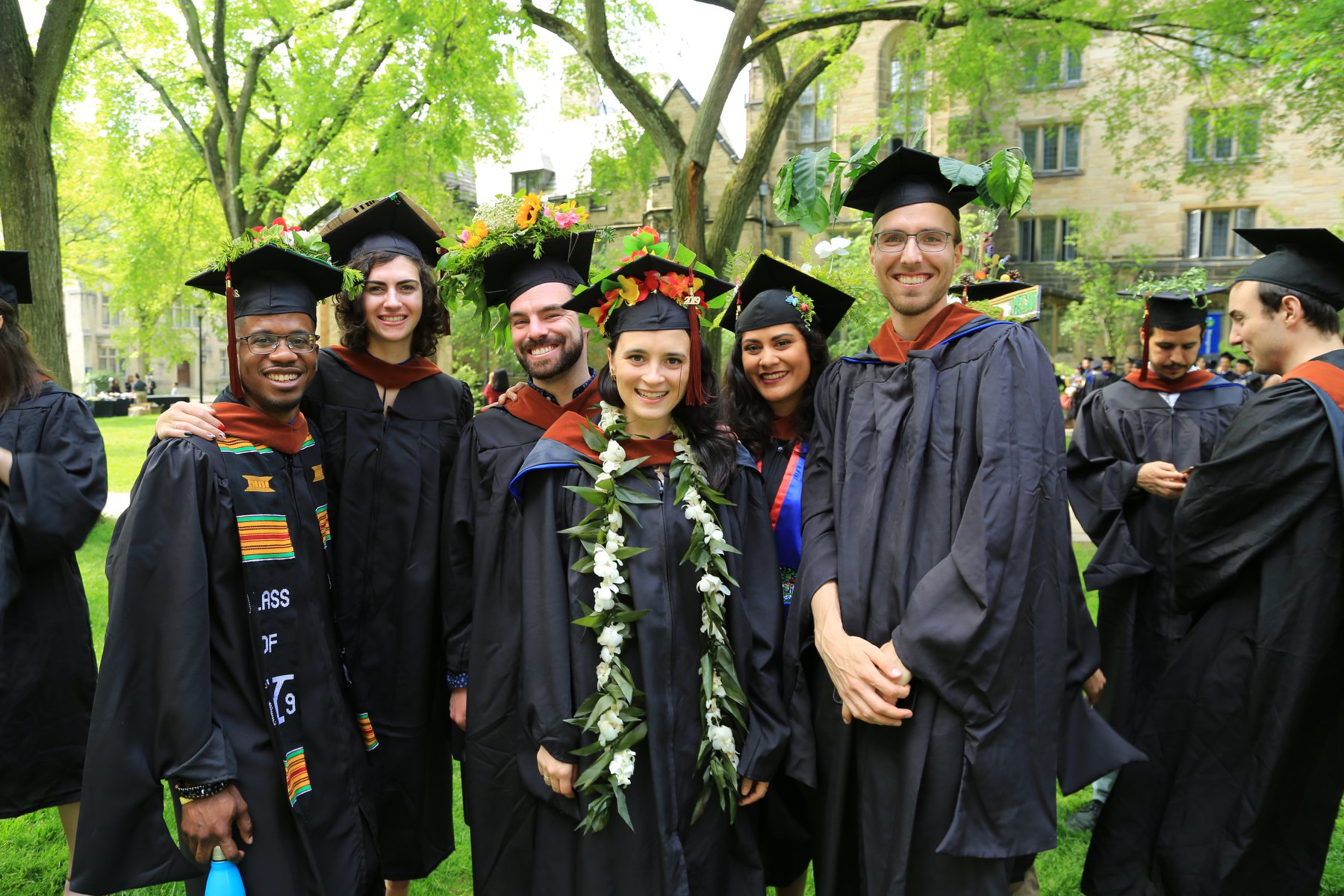 They will face challenges. Speaking to the class, F&ES Dean Indy Burke reminded graduates that they’re launching their careers at a time when environmental threats are growing — including a rise in the frequency and severity of extreme weather events — and yet policymakers refuse to make these threats a priority.

To counter these trends, she urged the students to “own” their expertise, with pride and confidence. But she also encouraged them to temper that confidence, to contemplate their “certainty” of what they know, how they interpret that knowledge, and their feelings.

“It’s important that we watch ourselves,” Burke said, “to be sure that our intellectual or personal certainty is not similar to the dogmatism represented by those who doubt the realities of science, and that our certainty doesn’t interfere with our ability to listen, to grow, to change our ideas and thereby improve our understanding and our effectiveness with others around us.”

The prospect of leaving the protection of graduate school and the comfort of friendships and community has sometimes been more than some students have been willing to bear, said Caroline Tasirin ’19 M.F.S., another class speaker.

“Change is scary,” she said. “But friends, of all people, shouldn’t we be the most familiar with change? At some point in our past we saw the atrocities being done to our environment, to indigenous people, to minorities, and we said, ‘This is not right! I want to change it. I want to be part of that change.’”

Speaking to his classmates, class speaker Myles Lennon ’19 Ph.D. recognized the occasion as a moment to commemorate each graduate’s contributions to movements and environmental and social struggles greater than themselves.

The trajectory of those struggles, he said, are evident in the hallways of Sage Hall, where the photos of every single class in the School’s history are displayed. In those group pictures, the slowly changing face of the environmental field is evident, as groups composed exclusively of white men in the early 20th century slowly give way to classes with greater diversity. In the past two years, students have used the photos to demand a more diverse school and environmental movement. The changes, Lennon says, represent incremental, albeit incomplete, progress. 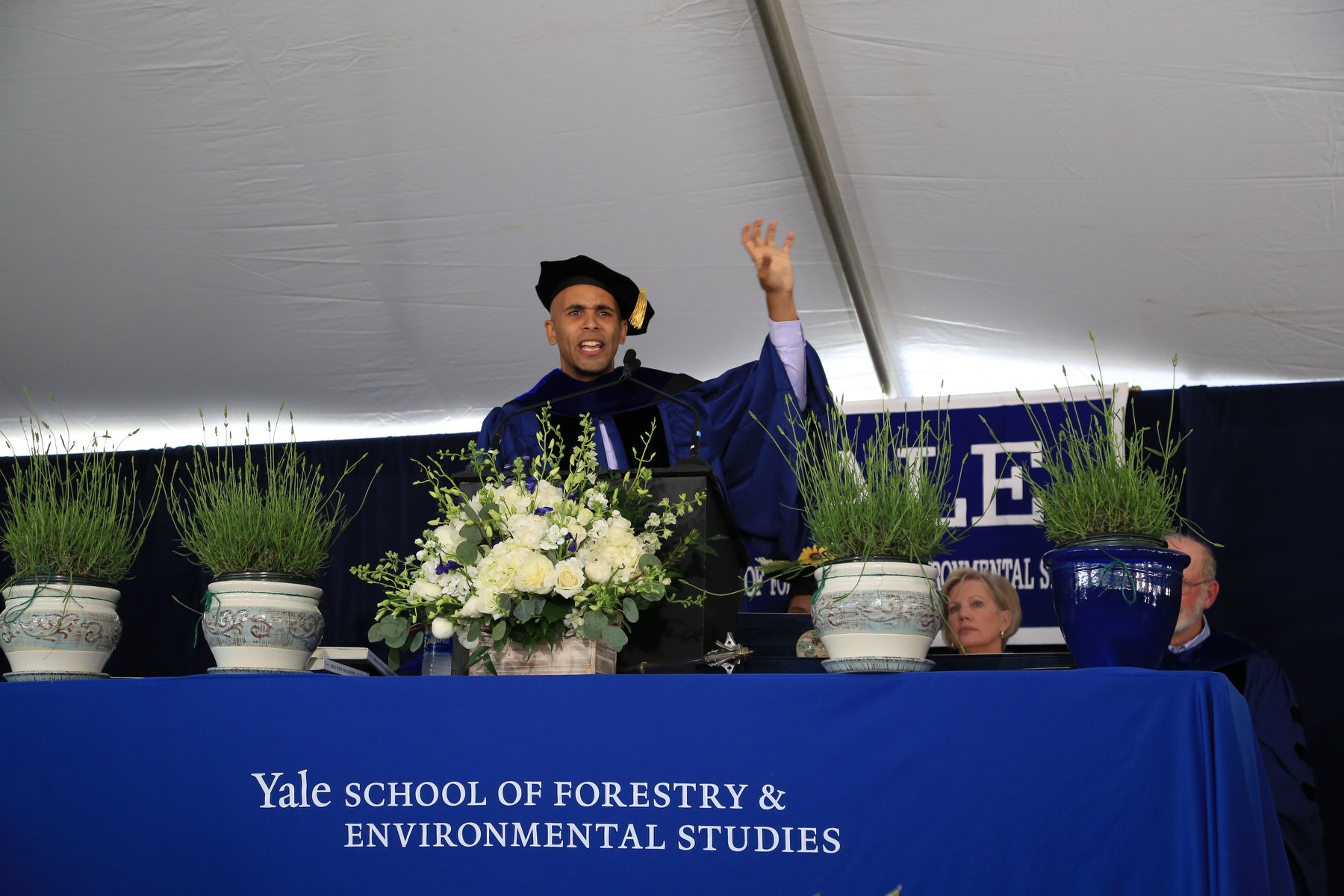 Photo by Matthew Garrett
Myles Lennon ’19 Ph.D. addresses his fellow students during the 2019 F&ES Commencement.
“While we know our school and our movements are by no means perfect… when we see this myopic snapshot of our work, we can’t help but note something loosely akin to what Martin Luther King called ‘the arc of the moral universe,’ an arc that includes struggles and setbacks and disappointments, but that nonetheless points resoundingly in the right direction,” Lennon said.

These days, Lennon said, it can be hard to believe that society is following such a trajectory or moral arc. Perhaps then, he told his classmates, their task is not to extend the arc of a moral universe or build on the progress of the past. Perhaps, instead, their task is to embrace the inevitability of struggle, to commit themselves to responsible stewardship, he said.

“We know the future we’re inheriting is unclear and uncertain, but that our moral resolve is unequivocally essential,” he said. “Because for the past few years, we have struggled for what we believe in, even when the political momentum rendered many of our efforts moot. And this fight is the only thing we can know for sure, as we endeavor to make that world that deep down in our hearts we know is certainly not likely, but just as certainly possible.”