An ongoing campaign to control a breakout of aphids in the trees outside Kroon Hall has included the spraying of vegetable oil and tree maintance. But in early June the university broke out a secret weapon: lady beetles.

Photo by Angela Chen-Wolf
Looking outside her office in Kroon Hall last summer, Sara Smiley Smith began to notice a curious phenomenon; again and again she watched as the faces of passersby would contort with horror, after which they’d break into a desperate sprint.

The pedestrians, it turned out, were unexpectedly being enveloped by clouds of flies as they walked through Kroon’s southern courtyard. When Michael West, a supervisor with Yale Landscaping and Grounds, and Israel Cordero, facilities maintenance assistant at the Yale School of Forestry & Environmental Studies (F&ES), first investigated the problem, they examined whether nearby trashcans were the source. When they ruled that out, it did not take them long to identify the nearby trees as part of the challenge.
“It’s nice to know that it’s a solution that addresses the problem while still being consistent with the values our community holds.”
— Sara Smiley Smith, Assistant Dean of Research and Sustainability
In a nearby willow tree they found a small army of aphids, plump and happy, feasting on tree sap. Those aphids were then secreting honeydew onto the sidewalk below; the honeydew not only attracted flies, it also promoted the growth of a sooty mold that covered the sidewalk.

“The aphids were unlikely to kill the trees,” said Smith, the Assistant Dean of Research and Sustainability at F&ES. “But they were creating enough of a community nuisance that we knew we needed to take action.”

By the end of summer, Yale Grounds recruited a local tree services company to partner with them in tackling the sticky situation. In keeping with the values of the School they went with Bartlett Tree Experts, which offered a suite of environmentally friendly options. Those strategies included spraying vegetable oil in late summer, and again this spring, to inhibit the aphid larvae.

Then last week they brought out the big weapon: lady beetles. On Wednesday, a team of experts from Yale Grounds and Bartlett released more than 9,000 hungry lady beetles beneath the trees that edge the courtyard — about 500, or three tablespoons per tree — including several oaks that had also become inundated. 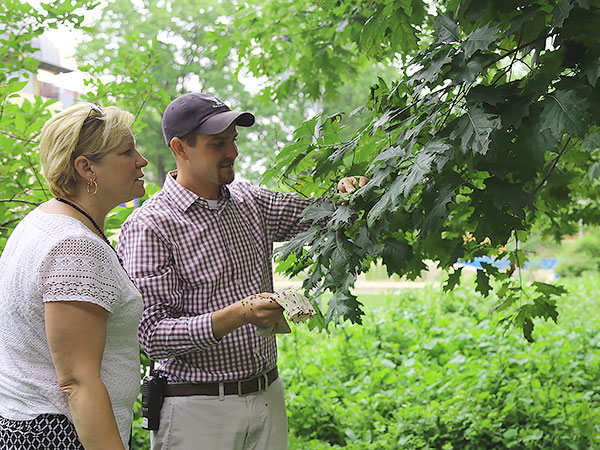 Photo by Angela Chen-Wolf
Michael West, right, a supervisor for Yale Landscaping & Grounds, releases lady beetles in the Kroon courtyard.
Within 20 minutes of being released from a teeming cloth bag, the lady beetles began making themselves at home on the courtyard’s trees. “Once you get them on the ground, they’re starving, they’re ready to eat,” said Richard Sala, an arborist with Bartlett Tree Experts. “And they’re making their way up.”

In the weeks to come, the lady beetles’ appetites will help to reduce the aphid population. Equipped with piercing mouthparts, which the beetles will inject into the back of the bugs and begin sucking, Sala said, the aphids will be easy prey.

It’s hard to predict where or when aphids will inundate any given area, Sala said. That said, they do enjoy black willows. And once they discover an appetizing habitat, it’s difficult to get them out.  “Unlike some insects that have, say, only one life cycle during a year, they are one insect that have multiple generations throughout the year,” he said. “They just keep multiplying.”

In this case, the best approach was ensuring proper care of the trees — including pruning and fertilization — and “beneficial insect release,” said West, of Yale Landscaping & Grounds.

They might not eliminate the aphids this year, or next year. “But if we control the population enough, hopefully it won’t be a problem that anybody notices,” he said. “There will probably be aphids that get away, but as long as it’s at a threshold that nobody notices, it’s a win.”

Yale Grounds and F&ES have built a strong collaborative relationship, enabling them to identify strategies for sustainable management and responsible stewardship, Smith said. Last year, the grounds crew helped members of the F&ES community with a “sheet mulching” project — in which cardboard and straw are used to impede the growth of invasive or less desired plants without the use of any chemical herbicides which might be an alternate choice — in the forest garden in Kroon’s northern courtyard.

The targeted strategy to deal with the aphids, she said, is just the latest example.

“By working with some really knowledgeable partners both on campus and in the community, we were able to find a solution using sustainable strategies — responsibly sourced and researched beforehand,” she said. “And it’s nice to know that it’s a solution that addresses the challenge, while still being consistent with the values our community holds.”
– Kevin Dennehy    kevin.dennehy@yale.edu    203 436-4842