Is Fracking a Threat to Public Health?
Yale Scientists Aim to Provide Answers

In an interview, Yale Prof. James Saiers describes the health concerns historically associated with fracking and how a new Yale research project could provide important insights into whether there is a link between unconventional drilling and adverse birth outcomes.
By Kevin Dennehy
A 2016 study by the U.S. Environmental Protection Agency (EPA) found that hydraulic fracturing, the unconventional oil and gas drilling procedure known as “fracking,” has contaminated drinking water in some cases. At the same time, however, the report found that data gaps and uncertainties made it impossible to fully characterize the severity of the problem.

A new Yale study will attempt to fill some of the gaps. Over three years, an interdisciplinary team of scientists will examine how fracking and horizontal drilling processes affect drinking water quality and neonatal health in the Appalachian basin, a hotbed region of natural gas production in the U.S. 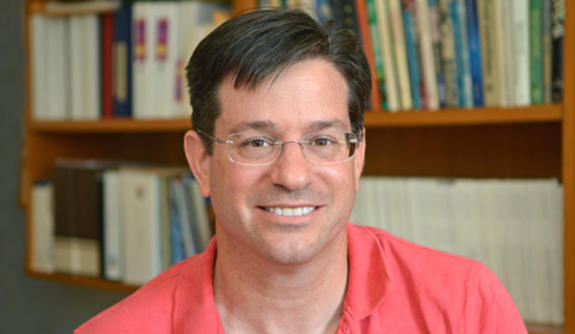 James Saiers
During the project, the scientists will develop modeling tools to characterize how water moves from drilling sites to drinking water supplies, will test drinking water at hundreds of private homes, and ultimately compare the outcomes with adverse birth outcomes in the region.

In an interview, Saiers describes the health concerns historically associated with fracking, why public concerns about unconventional technologies have waned in recent years, and how this new research could provide important insights into the potential risks.

Could you describe the oil and gas drilling processes you’ll be examining in this study? And how widespread have they become in the U.S. — and in the Appalachian region in particular?


James Saiers: The processes that have received a lot of scrutiny are hydraulic fracturing coupled with horizontal drilling. They are both a means to extract oil or gas from underground reservoirs that have very low permeability. So they need to be fractured in order to liberate the oil and gas and allow them to flow out to the well so that they can be recovered at the surface.

It has been long known that throughout North America there are certain oil and gas reservoirs containing great abundances of hydrocarbons. But for a long time the technologies didn’t exist to get them out; they’re considered “unconventional” reservoirs or low-permeability reservoirs. That started to change, in earnest, during the 1990s when they figured out how to combine high-volume, slick-water fracturing with horizontal drilling to recover gas from the Barnett Shale in Texas. After that was highly successful, these technologies churned and spread throughout the ‘90s and 2000s into other basins throughout North America — including into the Marcellus Shale, which underlies Pennsylvania, West Virginia and Ohio.

Now hydraulic fracturing is done in dozens of reservoirs throughout the United States and into Canada, and coupled with horizontal drilling it is being experimented with in England and China. And I suspect it will continue to take hold in the coming years.

What are some of the ways that these technologies can affect water in adjacent watersheds?


Saiers: The concerns can be broadly categorized into water supply and water quality issues. Water supply issues arise from the large volumes of water that are required to hydraulically fracture the horizontal gas or oil well. The laterals — the horizontal sections of these oil wells — are about a mile long, and sometimes longer. It takes more than 4 million gallons of water to hydraulically fracture these mile-long laterals. And that freshwater can be withdrawn from streams — as it typically is in the Northeast — or it can also be withdrawn from groundwater, which is more common in the more arid western states. 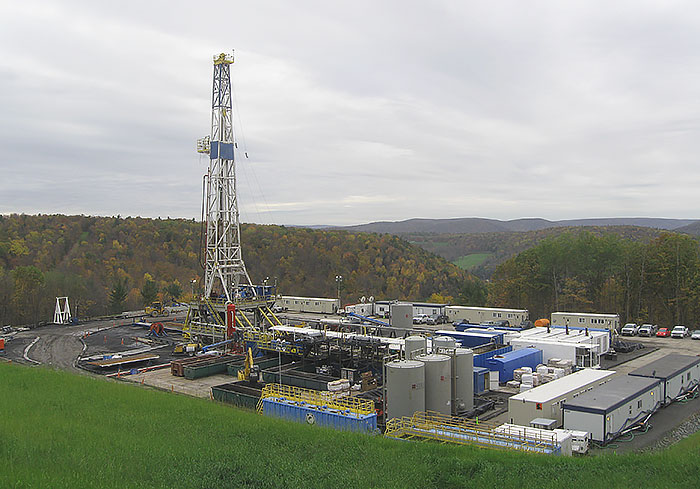 However, it is water quality issues that have gotten much of the attention, catapulted into the national stage mainly by methane pollution of peoples’ drinking water. Methane is the biggest component of natural gas; it’s what we burn in electric power plants to generate electricity. But suddenly you had people who were televised setting their tap water on fire. Methane is not particularly toxic, but it’s an explosive hazard and rightfully a concern. And often that methane is probably not attributable to the process of hydraulic fracturing itself but to faulty construction of gas well that were completed following hydraulic fracturing.

But while what happens underground is one concern, perhaps the bigger concern is what could happen on the surface. I mentioned that large volumes of water are injected into wells during fracking. That water doesn’t stay there but is expelled out of the wells. That wastewater — which is hyper-saline and contains organic chemicals and residuals from the fracking fluid — needs to be disposed of. And disposing of wastewater is probably the oil and gas industries’ biggest challenge outside of recovering oil and gas itself. Sometimes this wastewater is spilled on the surface. In fact, more than 1,000 spills have been documented in Pennsylvania, for example. If inadequately contained, spilled fluids can infiltrate the ground and run off into surface water or run off into peoples’ drinking water.

For this study you will be looking very specifically at potential health impacts and risk vulnerability.


Saiers: The study has several facets. The one that I will be leading is an assessment of peoples’ vulnerability to groundwater contamination. That vulnerability may depend on where they withdraw their water from in relation to where the gas wells are. It also depends on a number of hydrologic factors that affect the potential transport and dispersion of chemicals away from the source to the people. So we’ll try to develop a tool that can give you a spatially explicit idea of the risk, or the likelihood that drinking water will be contaminated should a release occur.

We will then test that by going to more than 500 households within the Appalachian basin and sampling their drinking water and analyzing it for a whole suite of chemicals. If our model is reasonable, we would expect to find a greater frequency of drinking-water impairment in locations designated as highly vulnerable. The drinking water analysis is being led by Desiree Plata, a chemist at [the Yale School of Engineering & Applied Science].

Then ultimately we’re going to use this model for drinking water vulnerability as a surrogate for exposure, and see if there’s a correlation between adverse birth outcomes and exposure as predicted by this vulnerability model. Some of the chemicals used in development of unconventional oil and gas reservoirs are carcinogenic or endocrine disruptors. So there’s some concern that if there’s a pathway of human exposure, these chemicals could affect human health. Nicole Deziel [at the School of Public Health] is taking the lead on the health side of the study, with a focus on birth outcomes.

How will you identify and approach the people you will work with?


Saiers: We’ve identified counties with Pennsylvania and Ohio, two states in the Appalachian basin where there’s a lot of oil and gas drilling. We’ll begin by contacting people by mail and we’ll have public forums. And once we identify people who are interested we’ll go back to them. Nicole will leverage her contacts in the community engagement she’s already developed in Ohio. I’ll leverage some of my contacts in Pennsylvania.

For at least a subset of these, we will want to visit these homes a couple of times several months apart. By doing that we’d be able to survey these houses in multiple stages of shale gas development. The time factor is important. If there are potential problems, if contaminants are being released into the environment, there is likely a time lag between when they are released into the environment and when they emerge with a receptor.

Last December the EPA found that hydraulic fracturing has contaminated drinking water supplies in some places. How might your study fit into this growing understanding of potential impacts?


Saiers: Although that study found that there have been comparatively few occurrences in which peoples’ drinking water had been impacted by oil- and gas-related activities — in relation, for example, to the number of gas wells drilled — they found that when these impacts did occur they could be fairly severe. But what also came across in that study was that there really was a dearth of data. There have been few systematic studies, and I think EPA was trying to fill that gap in knowledge and provide tools to policymakers and regulators to help them make informed decisions about shale gas development.

You’ve been looking at impacts in this region for a long time. What have you learned? How concerned are people in these communities about the risks?


Saiers: The level of concern among the population even within a locale is quite variable. Nicole [Deziel] will tell you that a lot of residents she speaks with are quite concerned about water quality, air quality, about not really understanding the process and the worry that arises from that uncertainty.

You might notice that the public’s attention to this issue at large has dimmed somewhat within the last several years. It’s still on the map, of course, but there used to be a New York Times article every week about fracking. There are a couple of reasons for that waning interest, I think. A lot of the original attention arose as these technologies moved into areas that had no history of oil and gas development, such as portions of Colorado, and northeastern Pennsylvania (they’ve been drilling in southwestern Pennsylvania for a hundred years.) But the other thing is the level of drilling activity since 2012 has really decreased. There’s less of it and it’s less noticeable. There are fewer trucks on the road hauling wastewater and you see fewer drill rigs being moved around and stationed. 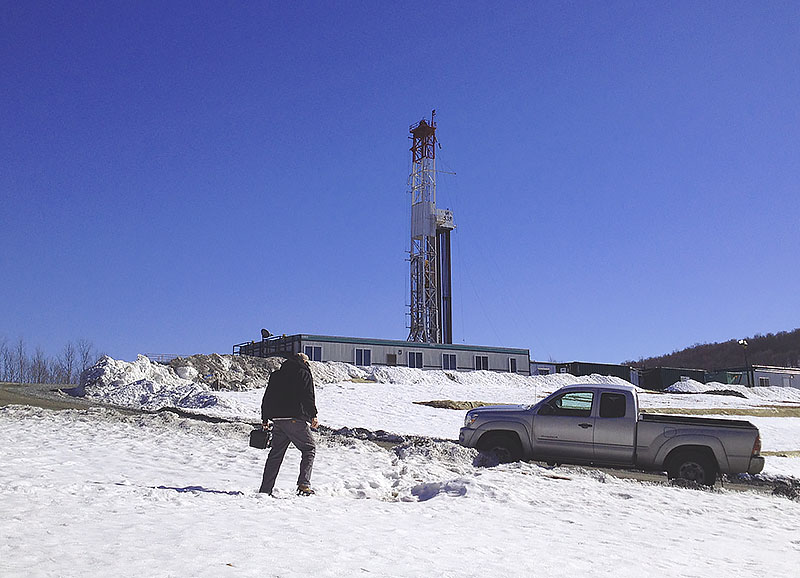 Photo courtesy of James Saiers
James Saiers walks away from a monitoring well located next to a drilling rig in Susquehanna County, Pennsylvania.
That reduction in activity has been driven largely by the industry’s success; these technologies have led to such abundance in natural gas that stockpiles have gone up and prices have gone down. But that could change if, for instance, we have a cold winter. Also, we’re building liquefied natural gas export terminals; we have one right now and others are coming online. So while most of the natural gas that we develop and produce now is used in the United States (or, at a smaller scale, in Mexico and Canada), if we begin exporting it abroad, that’s going to increase demand.

One thing I’ve learned is that you have to resist the simple assessment of whether fracking is “good” or “bad.” There are cases where it has led to problems, but it has also helped lower greenhouse gas emissions and stimulated manufacturing. I’m studying this issue because if we can understand where in the process and on the landscape problems are likely to arise, then we’re in a better position to develop safeguards that protect the environment and human health. They’re going to be producing natural gas with these technologies for a long time. Even if our electricity grid somehow went completely renewable we still use natural gas for manufacturing, to heat our homes, to heat our buildings. Because we will rely on natural gas for the foreseeable future, so it becomes all the more important to take reasonable steps to minimize the impacts of its extraction.