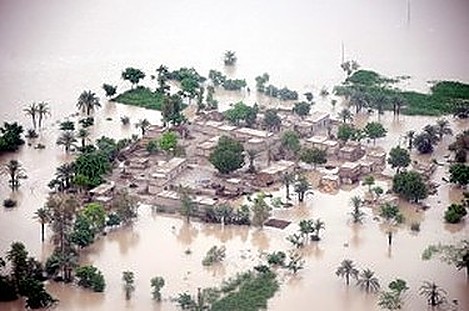 Flooding in Pakistan
The United Nations Office for the Coordination of Humanitarian Affairs (OCHA) recently released its annual Global Humanitarian Overview, the world’s most comprehensive assessment of global humanitarian needs. In addition to outlining global trends in humanitarian needs and potential areas of engagement, this year’s report tracked climate change-related funding and operations in disaster-affected nations.

This data analysis was led by students from the Yale School of Forestry & Environmental Studies (F&ES).

“Until now, there has been no data about humanitarian programs and government donor expenditure for climate change-related activities. This data is a wake-up call to the humanitarian sector and its donors that more must be done, including further study,” said Devin Osborne ’20 M.E.M., an F&ES student involved in the project.

The study found that between 2016 and 2018, just 3 percent of proposed projects by aid agencies in five disaster-affected countries — Iraq, Pakistan, Somalia, South Sudan and Syria — were related to climate change. Less than half of those projects received funding, the study found.

This week, in a press release, the U.N. asked the nations of the world to invest $29 billion in humanitarian aid in 2020, citing the Yale-led study in an urgent plea for engagement and response to climate change.

“Today we have laid out a plan to help those who need it most,” said emergency relief coordinator Mark Lowcock in the release. “But it will only work if everyone continues to play their part. Climate change, conflict and economic instability are devastating millions of lives. Together we must stand up, face facts, and fight back.”

The pilot project arose from a course, “Understanding the Origins of the Modern Humanitarian System,” at the Jackson Institute for Global Affairs led by lecturer Nathaniel Raymond. That course led to a subsequent independent study related to research by a fellow student — Jenna Davis ’20 M.E.Sc. — that Osborne proposed pursuing. They were joined by Courtney Durham ’19 M.E.M., Mads O’Brien ’20 M.E.Sc., and Bryan McCann, a student at the Yale International and Development Program, whose significant contributions led the team to name him lead author on the paper. Raymond and the students partnered with OCHA, who enlisted them to evaluate data related to how climate change was — or was not — being considered in appeals for funding.