The Yale Environmental Dialogue, an F&ES-based initiative that aims to add new energy to the national conversation about environmental issues, hosted an event at the Yale Club of New York to kick off Climate Week NYC. The event also served as a preview of the new book, “A Better Planet: 40 Big Ideas for a Sustainable Future.”
As people from across the world gathered in New York City last weekend for the start of Climate Week NYC, the Yale School of Forestry & Environmental Studies (F&ES) convened a group of experts in Manhattan to discuss possible solutions to the climate challenge.

At the Yale Club of New York, five experts discussed the state of the global response to climate change and shared their ideas to achieve meaningful change. The event was organized by the Yale Environmental Dialogue (YED), an F&ES initiative that aims to add new energy and fresh ideas into the national conversation on environmental policy. 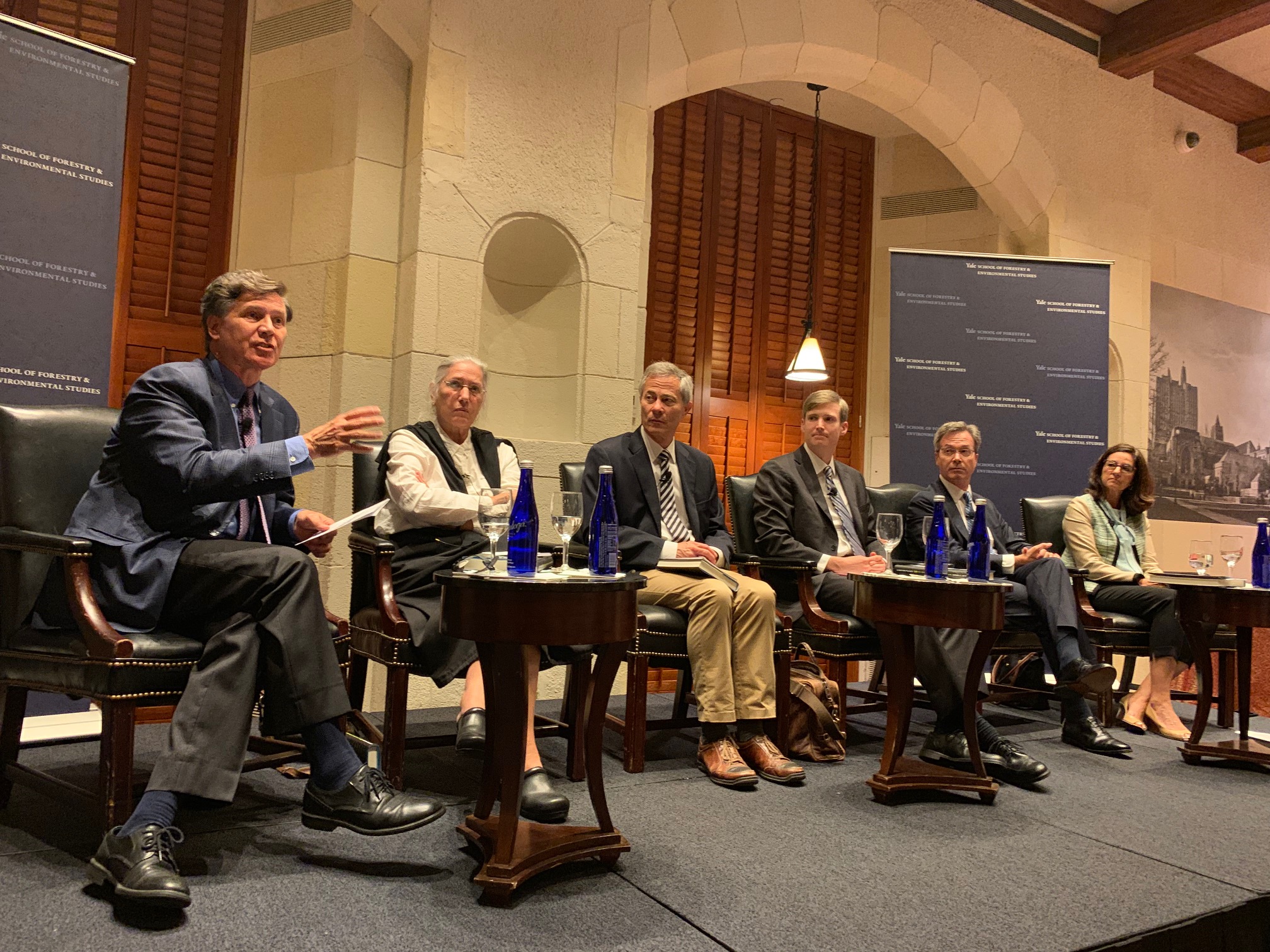 The event also served as a preview for the book, “A Better Planet: 40 Big Ideas for a Sustainable Future,” which will be published next month by the Yale University Press. The event was moderated by Daniel Esty, Hillhouse Professor of Environmental Law and Policy at Yale and editor of the book.

The five panelists, each of whom contributed essays to the book, shared with the audience their ideas for tackling the climate challenge. They included:


Following presentations of their ideas, the panelists addressed questions from the audience of more than 200 leaders from government, business, academia, and the non-governmental world.

The event happened at an auspicious time, Esty said. In South America the Amazonian rainforest is burning, and across the world national leaders face the realities of climate change. And even if the goals of the 2015 Paris Agreement are achieved, IPCC leaders have warned, it won’t be enough to forestall devastating climate impacts.

“So we face a challenge going forward of how we raise the ambition, move ourselves towards an even more aggressive approach to climate change,” he said. “And we hope the ideas in this book may be part of that process.”
“While we’re the species that’s responsible for all these environmental challenges we’re also the species that has the intellect, the innovation, and we hope the political will to make a difference for the future.”
— Indy Burke, Carl W. Knobloch, Jr. Dean, Yale School of Forestry & Environmental Studies
During the event, former Secretary of State John Kerry discussed how advances in U.S. climate policy have stalled, and how that is undermining global efforts to tackle this global challenge. “Every one of you who has a great idea has an obligation to create the political dynamic so that we can implement it,” he told the crowd.

The event was the latest in a series of conversations that will be hosted by the Yale Environmental Dialogue to promote innovative approaches and interdisciplinary thinking in the face of environmental challenges, said F&ES Dean Indy Burke.

"During these events we’ll be bringing together some of the world’s most respected environmental leaders across a range of disciplines, sectors, and political perspectives and we’re going to ask them to lead some difficult conversations,” she said.

“There are incredible environmental challenges that are happening right now. And while we’re the species that’s responsible for all these environmental challenges we’re also the species that has the intellect, the innovation, and we hope the political will to make a difference for the future to protect the planet for ourselves and for other species.”
– Kevin Dennehy    kevin.dennehy@yale.edu    203 436-4842